How Modernization Can Put a SPARC Back in Your Step 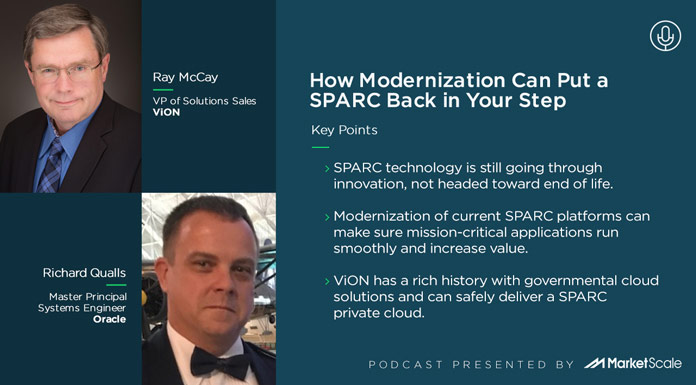 Tyler Kern catches up with Ray McCay, VP of Solution Sales for ViON, and Richard Qualls, Master Principal Systems Engineer, and learns about IT modernization and how Oracle SPARC technology can play a role.

Technology evolves and changes, but, too often, there is a rush to change everything completely rather than improving on what you have.

As many organizations begin to phase out past technology, many don’t think about simply improving the technology they have, a project that can come at a lower cost and often fits all their evolving needs.

Solaris, the SPARC operating system, is going to be supported into 2034 and, since SPARC is an open-source technology and Oracle and Fujitsu continue to innovate on it, it’s worth considering if a different solution truly is needed.

“The marketplace has really generated a false sense of urgency and a lot of misinformation on the topic. SPARC is definitely not end of life,” said Richard Qualls, Master Principal Systems Engineer at Oracle. “Solaris has got a lot of legs on it, and Solaris with the SPARC operating system continues its legacy of innovation.”

There are enormous benefits that come alongside modernization, said Ray McCay, VP of Solution Sales for ViON, with adjustments to be made that can increase value.

“You’re getting a new platform, so you’re getting higher availability, reduced componentry, which means reduced failures, fewer system issues, fewer outages. That’s all part of the story,” he said.

Other parts of the story include improved efficiency, decreased risk and a better security posture, automation and manageability.

That’s more than enough to call for a rethink of an “out with the old, in with the new” approach.