Purple Up! For Military Kids Day

Purple Up! For Military Kids Day 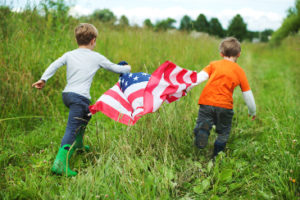 Inspired by the commitment to the military community, I became involved with Our Military Kids, Inc. in hopes to make a positive impact to military children’s lives. I joined the Military Kids Board as an opportunity to support those who protect the United States and help their children cope with the challenges brought on by lengthy separations.  As you become involved in the military community, it becomes clear how children are impactful by lengthy deployments. They should be encouraged and valued, and I believe Our Military Kids provides that mission.

While most Americans understand that a deployment can be hard on a family, they don’t fully realize the impact on military children. In a survey last year, more than 71% of families who had a spouse deploy overseas reported that their children had an increase in stress and anxiety because of the deployment. For families with a severely injured parent, 88% reported increased stress and anxiety in their children.

May is Military Appreciation Month and ViON, which is a veteran-owned company who employs members of the active military and veterans,  will “Purple Up” for military kids to thank them for their heroism, character, courage, sacrifices and continued resilience. All employees are encouraged to wear purple in recognition of the strength and sacrifices of military youth.  Why purple?  Purple is the color that symbolizes all branches of the military, as it is the combination of Army green, Coast Guard blue, Air Force blue, Marine red, and Navy blue.  This year, “Purple Up” Day will be celebrated on Monday, May 20.

Our Military Kids, Inc, a 501©(3) nonprofit organization who supports military children of deployed National Guard and Reserves and recovering from combat injuries sustained in all branches of service. Grants cover the participation in activities such as sports, fine arts or summer camp. Participation in these extracurricular activities gives military children a way to manage the stress and anxiety they may feel when their parent is gone or dealing with the consequences of severe injuries. For the past four years, Our Military Kids has received top ratings by Charity Navigator for efficiency and transparency.

Year after year, families credit these activities as an important coping mechanism in the lives of their children. In a 2018 survey of families who had received grants, almost 97% reported an improvement in the entire family’s well-being as a result of this gift.   Join our ViON family in support of our military and their families!  Our Military Kids continues to face a tremendous demand, as it is funded entirely by donations from individuals, foundations, and corporations.  For more information, please visit www.ourmilitarykids.org.